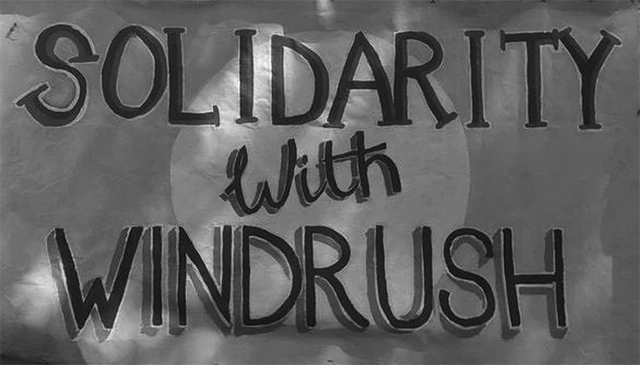 The Empire Windrush, carrying some 500 settlers from Jamaica, arrived at Tilbury Dock on 22 June 1948

Racism exists not only in Donald Trump’s “go back” to where you come from tweets.  But sadly, at builders’ merchants across Britain where Theresa May’s “Hostile Environment” empowers employers to discriminate and racially harass children of the Windrush generation.

Let’s take two examples of racial harassment. Every morning at a Birmingham builders’ merchants, before a black cleaner starts work, a black Afro-Caribbean lorry driver cleans the intentionally splattered faeces and urine from toilet basins in a men’s restroom.

The driver cleans the basins because he does not want the cleaner to face such an avoidable mess caused by his white co-workers, who compete with each other to see who creates the biggest mess.

When the driver confronts the employees responsible for spreading their shit and piss on the basins, they tell him “it’s the black bitch’s job to clean the toilets, if she doesn’t like it, she can fuck off”.

Another example of harassment, a black driver arrives at the same builders’ merchant to collect some material which he is told won’t be ready for an hour.  He finds himself a quiet spot to sit and have his lunch. While eating he is approach by a white customer of the merchant who racially abused him.

But for being black, both the cleaner and driver were doing nothing to justify them suffering discrimination during the course of their working day.

It is not only cleaners and delivery drivers who suffer discrimination. Most builders’ merchants employ few, if any black drivers. And when they are employed, drivers are treated differently from their white co-worker.

When a black driver has a mishap at work, he is described as a “useless black cunt” and faces disciplinary action for the same or similar offence for which white drivers go undisciplined.

In a way, the culture at builders’ merchants with regards to race is very much like Donald Trump’s.  He wants to turn America back to before the civil rights age, to   Jim crow. A time when Asians, Blacks and Hispanics knew their place, and was kept there by Jim Crow laws.

An era in which, like under South African Apartheid, any white child could and did refer to a grown black man as “boy”. If the “boy” objected, he was regarded “as having an attitude”. Today, this still as happens at builders’ merchants when a black driver raises issue of health and safety or objects to his workload.

Experience has shown the culture of builders’ merchants is what it was at the time of Windrush docking at Tilbury in 1948. Their discriminatory practice in many cases predates the 1968 Race Relations Act. The language of such employers has changed, but then as now discrimination was and is not a victimless activity.

The suffering of the Windrush generation must not continue to be visited upon their children. It is the aim and purpose of this website to challenge, by exposing it online, the “hostile environment” blacks and minority ethnic experience daily during the course of their employment.